So, now we’ve lost Group Voting Tickets (GVTs), and people will now actually be able to preference candidates they want rather than candidates that are chosen for them … what do we expect to happen?

Ok, so we have a couple of questions we’ve got to ask ourselves:

And, to be fair to (all the effort I may have definitely already put into) my analysis

I hope to cover a few of these briefly in this post, but importantly, there is much left to do. I will be covering improvements on these analyses over the next few weeks, and hopefully predicting the outcome of the election before I go and vote (as an exercise in personal nihilism).

Who do people vote for?

We are lucky to have two, complete, data sources for the last Federal Election:

Great! We have an idea of what our primary votes will look like in the senate. But we’ve still got to adjust to parties changing in the polls (goodbye Clive). There’s no (or at least, not much) polling data on senate voting (all the pundits love polling for the HoR). So… well… I’ve made some best estimates of state-by-state swings for each of the big parties, and a general percentage for the other parties (about 20% in most states).

LDP Vote% vs. "ballot placement vs. LNP". The average gain is about ~2.5% if they appear first. #vicvotes #auspol pic.twitter.com/UVgWzzJMU1

Well I’ve gone through the process of making some best judgements of genuine voter error (which is only really the LDP / LNP issue). Which is cutting off 6-6.5% of the LDPs vote in NSW, and moving it back to the LNP.

But we still don’t know where these votes are going.

Who do they preference after their first box?

Well, let’s go back to the ATL and BTL from the last election, and use the preferences from those. Right?

Let me explain. The problem with using this data by itself is two-fold:

So, I’ve gone deep into NSW State Election data for the Legislative Council in 2015. Thankfully they keep every preference. And I did the following:

So, this has a few cool features:

So we just have to change the length of this curve, and adjust it for real candidates:

And then cut off the actual BTL votes for each state at these levels. Cool!

Well, we can do the same analysis for how deep people vote: 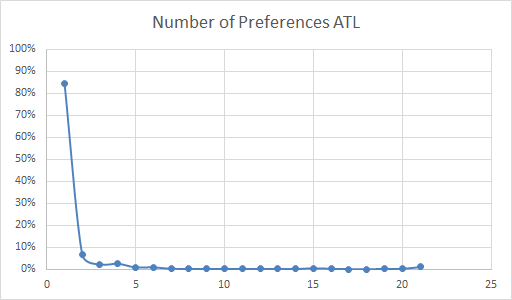 So, it’s kind of hard to see anything past the vast majority of people who only number a single box, so let’s take a look: 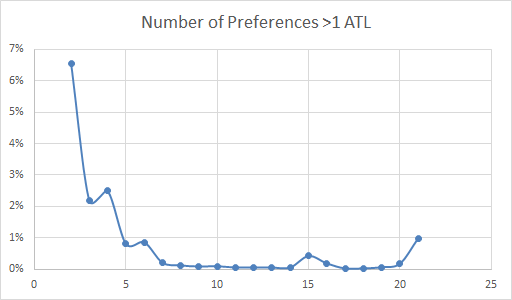 But there are some important differences between the NSW ATL and the new Federal Requirements.

With the savings provisions, these erroneous votes will still count, but they will affect preferencing. So I’ve made an initial model with the following features:

Well, show us some pretty graphs?

So finally, after a lot of work (and awful, awful code), we can make a little hex map of who would have been elected in a DD election in 2013 with the senate rules introduced in 2016.

The states, in order are: NSW, VIC, QLD, SA, TAS, WA and the two territories down the right. Returning to the original 85% preferencing exactly 6 parties, Family First would lose their only seat to Nick Xenophon.

P.S. The unknown parties? PUP is Yellow, LDP is dark blue, Orange is the Nick Xenophon Team and Light Blue is Family First. The major parties are Green for The Greens, Red for ALP and Blue for the LNP Coalition (Including WA Nationals).